What Is St. John’s Wort? 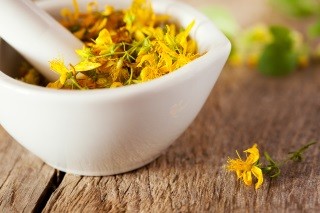 Hypericum perforatum, more commonly known as St. John’s Wort, is a medicinal herb that has been praised for its antidepressant and anti-inflammatory properties. Originating from a plant in the Hypericaceae family, St. John’s Wort has been used in other parts of the world dating back to the Middle Ages. As a result, many researchers have sought to empirically evaluate the efficacy of St. John’s Wort, which can be taken in capsule form, liquid form or as a tea. In the present day, it has been used in for reducing anxiety, and may also be used as a diuretic, to treat gastrointestinal issues and nerve pain, and for insomnia.3 Further, therapeutic research has looked into St. John’s Wort for premenstrual symptoms, smoking cessation and attention deficit hyperactivity disorder, among other conditions. Of the ailments it is used for, St. John’s Wort is best known for its use in patients with depression. As with many other alternative remedies for depression, the effectiveness of St John’s Wort varies in the literature. In terms of daily dosage, 300 mg, three times a day has been frequently noted as a standardized quantity of St. John’s Wort.

Efficacy in the Literature

From what we know about depression as an inflammatory condition, it might make sense that St John’s wort, which has been noted for its anti-inflammatory properties, might help in the reduction of depressive symptoms. St John’s wort works through a complex neurological process, which promotes balance of neurotransmitters that are often linked to depression like dopamine, serotonin, and norepinephrine. So what does the literature say? Though some have found that St. John’s wort has similar effect to the placebo on depressive symptoms9, others have indicated that its benefits were far more effective than placebo.5

In a randomized control trial of 251 patients with moderate to severe depression, those given St John’s wort experienced a 55% decrease in depressive symptoms.12 A recent large-scale meta-analysis supported the efficacy of St John’s Wort in patients with mild to moderate depression. This conclusion was based on the evaluation of 27 clinical trials published in English, German and Chinese journals. In this report, it was suggested that St John’s Wort may have comparable efficacy to SSRI’s. Some specific benefits of St John’s Wort in comparison to antidepressants include the tendency for it to have lower dropout rates than antidepressants.6 Further, St. John’s wort is considered a cost-effective remedy compared to standard antidepressant treatment.11

Some researchers have found that using St John’s wort with tricyclic antidepressants had more significant effects than tricyclic antidepressants alone.8It should be noted, however, that St. John’s wort has been known to reduce blood concentrations of chemotherapy drugs, sedatives, immunosuppressants, and anticoagulants.10 Further, combining St John’s wort with SSRI antidepressant treatment may lead to increased levels of serotonin, leading to serotonin syndrome.2 For this reason, and because of St John’s wort’s effect on the concentration of certain enzymes, individuals should seek their physician’s approval before incorporating St Johns Wort into their own treatment plan.1 There has also been some concern over hypericum-induced mania. Patients with a history of mania or hypomania should carefully consider the benefits and risks of St John’s wort before using it to supplement their depression treatment.7

In searching for alternative remedies for depression that would suit you, it is always advisable to obtain all relevant information, and talk with your physician before making the decision to use these options. Many researchers who have investigated the efficacy of St John’s wort agree that definitive conclusions about its effectiveness are not yet warranted.4 Further high-quality therapeutic trials should be conducted to determine its true benefits.