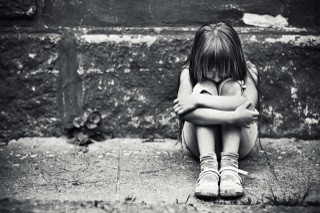 We know that events that occur in early childhood are important for healthy brain development and mental wellbeing. Research suggests that these events may be specifically relevant to depression in adulthood. Traumatic events in childhood, such as death, divorce, abuse and/or serious illness have the ability to interrupt the normal development of the brain. It has been hypothesized that these negative events can therefore lead to adaptations in brain circuitry which make the brain more at risk for mood disorders. One study looked at resting-state functional brain connectivity in adolescents. The researchers found that trauma in childhood predicted lower prefrontal–hippocampal connectivity in females and males and lower prefrontal–amygdala connectivity in females. These alterations in connectivity influences the development of internalizing symptoms such as anxiety, depression, loneliness, and withdrawal. We know that females are considered to be more at risk for anxiety and depression in general, the researchers explained that this might be due to the additional impact of trauma on fronto–amygdala connectivity in females.3

While this is one explanation for why we often see an association between childhood trauma and depression, it is important to also consider the strength of the evidence for the association in general, as well as proposed variables mediating the association. A fair amount of research has been dedicated to answering these questions. Most of the literature agrees that childhood trauma affects psychological, social and neuroendocrine processes which contribute to the increased risk for depression.4

In one sample of chronically depressed patients, self-report measures of traumatic childhood experiences revealed that approximately 75% of the sample reported clinically significant histories of childhood trauma. Furthermore, 37% of the sample reported multiple instances of childhood traumatization.9 The researchers also found that those who reported multiple traumas indicated higher depressive symptom severity. Others have similarly found that child abuse and/or neglect were associated with increased risk of depression, especially in children who were physically abused or experienced multiple types of abuse.10 Depressed individuals have also been found to have increased instance of oxidative stress and greater instance of poor parenting styles than non-depressed individuals.8

While the evidence presented here certainly suggests an association between the experience of childhood trauma and the development of depression, it is important to understand that not all depression may be related to childhood trauma and that there are other individual factors that might put one more at risk for developing depression. For example it has been found that being female, and having certain genetic dispositions increase one’s risk for depression by interfering with stress response.2

When observing symptoms that seemingly related to childhood trauma, it is also important to screen for PTSD, and to distinguish the symptoms of PTSD from symptoms of depression for the most accurate diagnosis. Symptoms of PTSD may mimic those of depression and vice versa, especially in the diagnostic criteria addressing negative alterations in cognitions and mood and marked alterations in arousal and reactivity. However, it is important to determine whether PTSD is present in order to implement the most effective treatment; there are several differences in medications prescribed and differences in the type of psychotherapy used for each (i.e. cognitive processing therapy for PTSD and standard cognitive behavioral therapy for depression).

What should be clear is that there are a multitude of factors that may influence the development of depression and the severity of depressive symptoms, whether they are at the cellular, genetic or environmental factors, individual differences exist. Childhood trauma may be related to a number of psychological conditions, and is only one of the many factors that has been found to be associated with depression.

6. Huh, Kim, Lee, & Chae. (2017). The relationship between childhood trauma and the severity of adulthood depression and anxiety symptoms in a clinical sample: The mediating role of cognitive emotion regulation strategies. Journal of Affective Disorders, 213, 44-50.