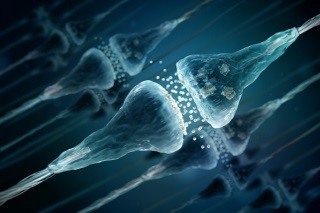 Serotonin is one of the more well-known neurotransmitters produced by nerve cells in the brain. It works by transmitting signals between nerve cells and is involved in a variety of processes to include healing wounds, stimulating nausea, and maintaining bone health. It is more widely recognized, however, as contributing to mental wellbeing and happiness. Serotonin is created from the amino acid tryptophan, which enters the body predominantly through diet, more specifically, through foods such as red meat, cheese and nuts. A deficiency in tryptophan has been found to lead to lower serotonin levels, which has been associated with increased risk of developing mood disorders such as anxiety or depression.

Normal levels of serotonin in the blood are thought to range from 101-283 nanograms per milliliter. There is not currently an effective way of obtaining an estimate of serotonin levels in the brain, so this is often used as the primary indicator of serotonin levels, with the assumption that serotonin levels in the body may be reflective of those in the brain as well. Adequate levels of serotonin are associated with feeling happier, more focused, and more emotionally stable. While there has been controversy surrounding serotonin’s role in depression, the most recent research tends to agree that an increase or decrease in serotonin does affect depressive symptoms.5 That being said, it is hard to distinguish whether depression is caused by the imbalance or the imbalance is a result of depression. Findings such as these are consistent with the neurochemical imbalance hypothesis of depression, which suggests that an imbalance of neurotransmitters or hormones in the body may lead to the development of depression. The use of SSRIs (serotonin selective reuptake inhibitors) in the treatment of depression stems from this hypothesis.

SSRIs are approved by the FDA to treat depression and are considered a first-line treatment for depression. This form of antidepressant is also often noted as the most commonly used. Some of the common examples include Prozac and Zoloft. While their mechanism for reducing depression remains somewhat hypothesized, it is believed that medications like SSRIs that affect the levels of serotonin in the bloodstream, are able to reduce depressive symptoms. Without SSRIs, once a neurotransmitter has sent its neural impulse, it is reabsorbed. SSRI’s work by blocking this reabsorption of the chemical, so more of the chemical remains active in the synapse of the nerves in the brain, leading to increased levels of serotonin, which then is associated with elevated mood.7

Use of SSRIs for Depression

Aside from its benefit of reducing depressive symptoms, SSRIs have been found to be more cost-effective than other antidepressant treatments such as tricyclic antidepressants.6 Serotonin selective reuptake inhibitors have also shown to be associated with lower rates of treatment termination.3 While overall, SSRIs have been praised as an effective treatment method for depression, they are not without faults. After beginning SSRI treatment, patients may experience nausea, diarrhea, dizziness, insomnia, headaches, and sexual dysfunction1 among other minor side effects. These symptoms generally subside after the first two weeks taking the medication, however, each patient may respond differently to different SSRIs.

There are several factors that might influence the efficacy of an SSRI in treating depression such as differences genetic composition2, psychological, or environmental factors. Knowing that each type SSRI is similarly effective in reducing symptoms of depression, it may be that one patient responds more positively to one over another.4

Discussing all SSRI options with a physician is the best way to determine whether one SSRI would be a better fit for you over other options. Though antidepressants have been found to be effective in treatment, as previously mentioned, there are differences in the effectiveness of SSRIs for each individual, and medication alone is often not able to address all of these differences; for this reason, psychotherapy plays a critical role in the treatment of depression . A combination of psychotherapy and psychopharmacology is considered the gold-standard for treating depression.