Can Exercise Help With Depression? 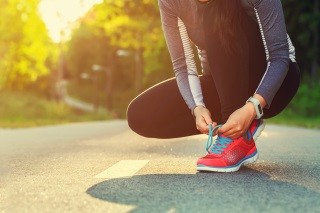 Exercise- we love it or we hate it. Either way, there is no denying that physical activity has obvious health benefits; it controls weight, minimizes risk of cardiovascular disease and other medical conditions, boosts energy, and promotes sleep. Exercise is an essential part of a balanced lifestyle. For this reason, the CDC recommends a minimum of 150 minutes of moderate-intensity exercise weekly. Aside from its positive influence on physical health, exercise has shown to be beneficial to mental health. More specifically, recent research illustrates that exercise may be beneficial in managing and/or reducing symptoms of depression.

Why Would Exercise Be Beneficial in the Treatment of Depression?

Let’s review the practical reasons that exercise may be beneficial in reducing symptoms of depression. There are both psychological and biological factors that should be reviewed. First, exercise has shown to be associated with stronger self-esteem and self-efficacy- both of which are mechanisms that are correlated with better feelings about oneself.2 An improved opinion of one’s self may translate to an improved outlook in other areas. Other psychological mechanisms include improved ability to cope3, self-concept7, and improved quality of sleep.

From a biological standpoint, exercise is associated with the release of Beta endorphins, which act as feel-good chemicals and natural pain killers. Increased levels of serotonin are also associated with physical activity; serotonin has shown to influence mood with high levels of the chemicals associated with elevated mood and low levels associated with depression. Brain studies have shown that exercise promotes growth in the hippocampus, an area of the brain that is smaller in depressed individuals5. Alternatively, we have already discussed exercise’s impact on general physical health. By reducing confounding medical variables, exercise may have a positive influence on overall mood.

Exercise’s Efficacy as an Alternative Treatment

The evidence of exercise’s efficacy as an alternative treatment for depression compared to other forms of evidence-based interventions such as psychotherapy and/or psychopharmacology varies, however, it is generally accepted that exercise is beneficial in some sense. As to the extent, some research has reached to suggest that exercise is as effective in treating depression as antidepressants and talk therapy4, while others argue that exercise should be considered as an add-on intervention.8

While all forms of exercise are thought to be beneficial to overall well-being, evidence suggests that only moderate and high intensity exercise actually improve depression levels. Further, in mild and moderate depression, exercise may have a more significant effect than in severe depression.1 That being said, many researchers do agree that in severe depression and treatment-resistant depression, exercise may be beneficial when used complementary to another treatment rather than being used as an alternative treatment method. In one study, individuals with treatment-resistant depression who participated in a 12-week exercise program had remission rates 26% higher than those in the control group.6

Researchers continue to investigate the impact that regular physical activity has on depressive symptoms. As discussed, there are psychological and biological factors associated with exercise that are associated with improving depression. Overall, exercises with moderate intensities and durations completed frequently have a stronger effect on depressive symptoms. Literature varies in the strength of the effect that physical activity has an alternative treatment for depression. As in the treatment of other mental health conditions, a holistic approach should be utilized to consider pharmacology, psychotherapy and relevant lifestyle changes in the treatment of depression. That being said, however, knowing the physical and psychological impact that exercise has on functioning, it is safe to generalize that adding a physical activity program to an existing treatment plan is likely to reap benefits in the depressed individuals’ quality of life.