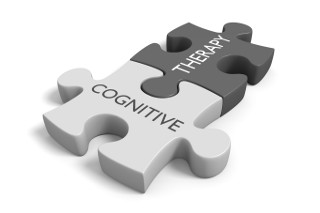 Cognitive Behavioral Therapy (CBT) is arguably one of the most recognized and widely used forms of psychotherapy. Based on identifying maladaptive patterns of thought and behavior and implementing strategies for change, CBT is a short-term, evidence-based approach. Cognitive Behavioral Therapy is praised for helping individuals identify ways to manage grief, work through trauma, cope with emotions and overcome stressful situations. It has been applied to a range of mental health conditions from anxiety to eating disorders.
CBT is generally characterized into 3 main phases to include: assessment, implementation, and relapse prevention/termination. In the assessment phase, a clinician works with their client to determine motivations and expectations for therapy. During this phase self-defeating cognitions/behaviors to be the focus of treatment. The second phase of CBT is when the implementation of behavioral strategies such as activity scheduling and/or cognitive restructuring, focused on changing negative thoughts, occurs. The final stage provides clients with resources to aid in relapse prevention so that individuals are better prepared to cope in their daily lives.

Cognitive Behavioral Therapy as a treatment for depression has been the focus of many studies across various contexts and populations. The American Psychological Association has recognized CBT as as an evidence based, effective treatment for depression in their Guidelines for The Treatment of Major Depressive Disorder and considers it a first-line treatment in patients with severe, or complex depression when combined with psychopharmacology. In patients with mild or moderate depression, and/or in pregnant or breastfeeding women, APA suggests that Cognitive Behavioral Therapy may be efficacious as a stand-alone treatment.1

Overwhelmingly, most research concerning CBT and depression emphasizes the effectiveness of cognitive behavioral therapy in conjunction with medication. For example, in a study involving 439 patients between the ages of 12 to 17, a combination of CBT and fluoxetine had the most favorable effects on major depressive disorder and suicidal ideation, with response rates at 71%, when compared to CBT alone (43.2%) and fluoxetine alone (60.6%).6 Another study using fluoxetine found that in 46 youth between the ages of 11 and 18, CBT supplementing a standard 12-week antidepressant treatment reduced the relapse risk when compared to the antidepressant treatment alone.5 In general, these types of results remain consistent across antidepressant studies. In patients on antidepressants whose depression was unresponsive, switching to a new SSRI while receiving CBT elicited more positive results (54.8% improvement v 40.5% improvement when switching medication alone).3 Wiles et al. provided us with another example of CBT’s efficacy in treatment resistant depression, when used in combination with usual treatment (presumably antidepressant therapy), those who incorporated CBT saw response rates as great as double those of individuals who used usual care alone (46% v 22%).7

A consensus on the effectiveness of CBT in the treatment of depression remains across several other more specific contexts. Further evidence for CBT was demonstrated in late life depression. One study suggested that due to its nature, CBT may be particularly beneficial in individuals experiencing late life depression if weaknesses in executive functioning were present.4 Finally, CBT’s effectiveness has been studied in comparison to other forms of psychotherapy. In one particular study, researchers sought to compare cognitive behavioral therapy with systemic behavior family therapy (SBFT), and individual nondirective supportive therapy (NST). Results found that the participants who participated in CBT showed reduced rates of major depressive disorder than those who participated in NST and a higher rate of remission than those who participated the SBFT.2