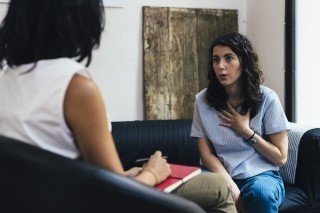 Exposure therapy is a form of cognitive-behavioral therapy that encourages the systematic confrontation of feared stimuli, which can be external (a spider-phobic patient handling a spider) or internal (a patient with panic disorder experiencing heart palpitations that elicit anxious reactions). The primary goal of exposure therapy is to reduce a person’s fear or anxious reactions to particular stimuli. This is done through gradually desensitizing the individual to the stimulus over time. Particularly useful in the treatment of anxiety disorders, post-traumatic stress disorder, obsessive-compulsive disorder, and phobias, exposure therapy has demonstrated efficacy as a safe and powerful method. Because exposing a client to their fears or prior trauma without first teaching them appropriate coping techniques can result in re-traumatization, exposure therapy is typically conducted within a psychotherapeutic relationship with a therapist who has been trained and is experienced with the technique.

Substantial research indicates that exposure therapy is arguably the most effective treatment method for specific phobias and is associated with lifelong results.10 For example, one study found that single-session in vivo exposure for patients with specific phobias was associated a significant reduction in fear, avoidant tendencies, and overall level of impairment at follow-up, with many patients being completely recovered from their phobia.8 Some evidence further suggests that the efficacy of exposure is superior to that of certain medications used to treat phobias such as phenelzine.12 Prolonged exposure, which is characterized by re-exposure to one’s phobic object without avoidance, is one strategy of exposure therapy that has been deemed efficacious, particularly when it is used with in-vivo exposure.13

Available evidence suggests that exposure-based therapy should be considered as a first-line treatment for a variety of anxiety disorders. It has been proposed that, in individuals with anxiety disorders, a fundamental aspect of anxiety-provoking situations is that individuals perceive these situations to be out of their control. One of the critical cognitive changes that occurs in exposure therapy is disconfirming this low sense of perceived control.6 For example, exposure therapy is as effective to cognitive therapy in the treatment of panic disorder and other anxiety-related disorders.9