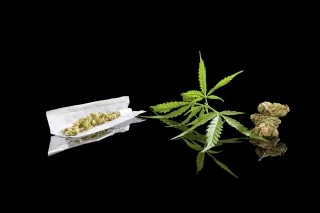 Cannabis is a product that is cured from the Cannabis sativa plant. While cannabis contains a number of compounds, tetrahydrocannabinol is considered the primary source of its psychoactive effects. Marijuana, a greenish-gray product consisting of the dried flowers, leaves and stems of the cannabis plant is the most widely consumed form of the substance. While cannabis is most commonly smoked using pipes, water pipes, cigarettes, and rolled in cigar papers, the substance may also be ingested orally through food and/or vaporized. According to the DSM-5, some of the common street names for the substance include weed, pot, herb, grass, and dope, among several others.

Cannabis is estimated to be the most widely used illicit psychoactive substance in the United States. The 12-month prevalence rate among 12-17 year olds is 3.4% and is 1.5% among individuals 18 years and older. While cannabis use may occur at any age, the highest usage rates occur among 18-29 year olds, with cannabis use decreasing with age. Males have been found to be more likely to use the substance than females.

What is Cannabis used for?

While cannabis is most commonly used recreationally and socially, certain cannabinoid compounds such as synthetic oral formulations or delta-9-tetrahydrocannabinol (delta-9-THC) have been approved for medical use for certain conditions which include Marinol, Syndros, and Cesamet. All three medications are used to address nausea and vomiting induced by chemotherapy, whereas Marinol is also indicated for treatment of eating disorders associated with weight loss in patients with AIDS.

What are the Effects of Cannabis?

The immediate effects of cannabis often include changes in perception, heightened mood, and increased appetite. When taken in high doses, hallucinations, delusions and psychosis may also occur. Users may experience inhibited short-term memory, impaired motor skills, feelings or anxiety or paranoia and/or dry mouth. These effects of cannabis use generally occur within minutes after the substance is smoked and 30-60 minutes if it is cooked into food and eaten. The effects may last anywhere from two to six hours.

What are the Long-Term Effects of Cannabis Use?

While many of the long-term effects of cannabis use are still being researched, current evidence suggests that long-term marijuana use may affect brain development, influencing impaired thinking, memory and learning functions in those who begin using in adolescence. Research has found this through alterations in the anatomy of brain regions such as the prefrontal cortex, amygdala, hippocampus and cerebellum.

Other long term effects include problems with irritation to the lungs and breathing difficulties, increased heart rate, and Cannabinoid Hyperemesis Syndrome, which is associated with cycles of intense nausea and vomiting which lead to dehydration and may require emergency medical attention. While some studies have found associations between cannabis use and psychosis, along with other mental health conditions, these links have not yet proven to be causal.

What is a Cannabis Use Disorder?

According to the DSM-5, the diagnostic criteria of cannabis use disorder include:

A problematic pattern of cannabis use leading to clinically significant impairment or distress, as manifested by at least two of the following, occurring within a 12-month period:

What Causes Cannabis Use Disorder?

Genetic, biological, environmental and temperamental risk factors may all play a role in the development of a cannabis use disorder. Like any other psychoactive substance, the THC in cannabis is absorbed into the bloodstream and acts as an agonist on cannabinoid receptors in the brain. The activation of these receptors lead to an increase in dopamine release, leading to the psychotropic effects. Some individuals’ brains naturally release higher levels of dopamine in response to substance use and receive heightened pleasure from its effects. These individuals are often those who are more susceptible to the development of a cannabis use disorder.

According to the DSM-5, 30-80% of the total variance in risk of developing a cannabis use disorder are genetic, meaning that heritable factors are likely at play. Further, environmental risk factors include poor academic achievement, smoking tobacco, low socioeconomic status, unstable family environments and a history of cannabis or substance use among family members. Finally, those with a history of conduct disorder in childhood or adolescence have been found to be more at risk for developing a cannabis use disorder.

What are the Symptoms of Cannabis Withdrawal?

What is the Treatment for Cannabis Addiction/Use Disorder?

The first-line treatments for cannabis use disorder are psychotherapy and 12-step programs. Several approaches have shown to be effective to include: cognitive-behavioral therapy (CBT) and motivational enhancement therapy. CBT focuses on identifying feelings, modifying distorted thoughts, and finding alternatives to maladaptive behaviors, i.e. cannabis use. Motivational enhancement therapy focuses on building motivation and committing to specific treatment plans to work towards recovery. This type of therapy is most commonly used in the early stages of treatment to increase engagement and motivation to change addictive habits.

While there are not currently any FDA-approved medications specific to treating cannabis use disorder, one over-the-counter medication N-Acetylcysteine (NAC) has been found to be associated with a decrease in marijuana use, craving and drug-seeking behavior. NAC is an antioxidant that has been found to reduce down-regulation of the cystine glutamate exchanger which is induced by drugs, allowing for regulation of glutamate release and improvement in symptoms of addictive disorders.